Undoubtedly, the MacBook Pros with the M1 Pro or M1 Max chip announced yesterday are going to make mimoLive scream. Based on the mimoLive M1 beta on our Mac mini M1, the performance should be astonishing.

Having worked on the new mimoLive Box˝ recently, I noticed some shortcomings to using a portable Mac, though:

So, I thought, a modified mimoLive Box˝ would be a great idea.

The design goal would be to have only ONE cable from the MacBook Pro to a box with all the i/o devices safely mounted in. This cable would also provide power to the MacBook Pro.

But how to connect all the required interfaces in the box, so that only one cable goes to the MacBook Pro?

So, basically, it would work with 3 Thunderbolt 4 ports and running three cables into the 19 inch case. This would make the setup almost as seamless as the current mimoLive Box but still has the problem of three fragile connections and it leaves no room for other options like output to a projector through HDMI.

We can move the Ethernet adapter into the PCIe Expander which would free up one Thunderbolt port and reduce the number of cables to 2.

What are your thoughts and ideas? How could this be improved?

I would love if Mimolive was screaming rather than me at my MacBook!

I would love if Mimolive was screaming rather than me at my MacBook!

We can only be sure once we tried. I suppose it depends on what is going on in the documents. For example, it may be possible to have one 8K source (I’m curious what capture device and camera you have in mind?) and play it out to an 8K display and add some lower thirds, but maybe not two or three 8K sources. Or, if your document is really 7680x1000, it may be possible to use a couple of HD cameras and compose them together to produce this output, but again I’m curious what output device you’re going to use to play out this format? 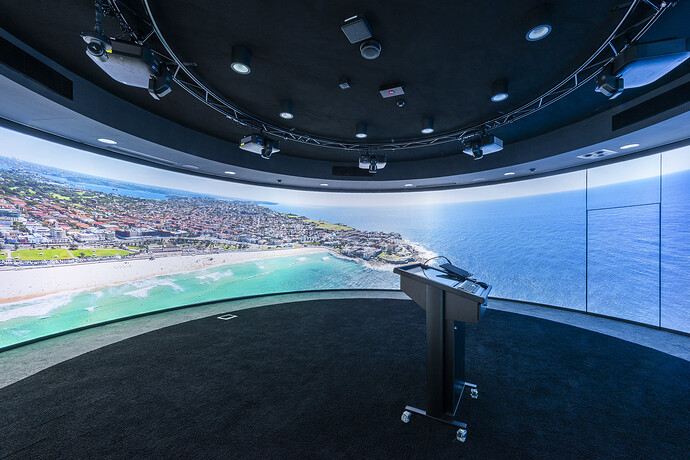 Using automation Id control both docs simultaneously but with different content layouts for the different outputs.

The base layer source would be a 360 8k video downsized to 4K by chopping off. The 1920x1080 would just get a front facing frame of that.

Be so awesome if this could be done with new MBP:
Apple M1 Max chip with 10-core CPU, 32-core GPU and 16-core Neural Engine
64GB unified memory

Wow, this is very cool!

The challenge here will be to unwrap the 360° camera and map it into the dome. Also, what video format has to go into the dome? Can the “screen” on a Mac can be just any size and can you just plug in an HDMI cable?

We use the mimolive document to layout mosaics using layers.

I’ve already demo’d mimolive livestream into an Igloo - in lower resolution it worked but my machine wouldn’t let me sustain 7680.

What’s you gut feel? Will this new MBP have the horsepower to let Mimolive scream in my use case

The whole thing is remote!!! No hdmi required.

The feed is livestream produced by me in India to our students in Australia/America/Europe. We’ve tested India to Australia and it held up (300mbps upload fibre via LAN). The weak link was the MBP 2018.

That all is really interesting. I’m excited about, we ordered M1max, full specs, because the beta for MBproM1 was outstanding. I hope to greenscreen all 8 camera inputs with it. Some bottle necks are wider, like memory bandwith (from 60 to 400) and also disc speed is increased!!

I hope the promised delivery date will be on point!

I want to show some real live performance tasks on uMIMOtuts’s YT channel!

Awesome! Maybe once you’ve got your machine I can share a couple of documents with you and we can see if it works?

Please do not hesitate to do this!!! Let’s bring it to its max!!!

Very excited for this! Can’t wait to test this. I use MimoLive only for SDI playout to the ATEM but love the idea of using it on the new M1 Max for smaller productions.

@Oliver_Boinx have you ever considered using Dante?

Regarding Dante: It is entirely possible to use the Dante Virtual Soundcard with mimoLive. I know some customer are doing it
Thanks for bringing this up again, though. I just checked and noticed that they now offer an SDK for apps to integrate with to enable direct input/output via Dante. I’ll put that on the feature request list.

In the past, Dante really only had a licensing model for hardware device manufacturers.

I’m sure! I meant that I want to purchase a new Macbook Pro M1 Max for smaller productions where I just want to bring a laptop. I have quite a big setup running also MimoLive for bigger productions, which includes talkback for camera operators, ProPresenter for slides etc.

Regarding Dante: It is entirely possible to use the Dante Virtual Soundcard with mimoLive. I know some customer are doing it

Considering Dante, I also solely use Dante for my video productions. Virtual Soundcard doesn’t work yet on M1 but Dante Via works great.

Overall I’m glad to hear that you guys continue to develop MimoLive. I can’t wait to run it natively on M1 and play with a shitload of layers again

Anybody have any stress tests on M1 Pro or M1 Max using mimoLive yet? very keen to see to help my purchasing decisions. Thanks.

No, I still wait for the delivery by Apple.

Which MBP model have you ordered, JoPhi?

Same for me. I’m finding it difficult to make a decision between the M1 Pro and the M1 Max. Additionally, would it be wise to upgrade RAM, and if so, to what extend does it help MimoLive.

We do not have first hand real world experience yet, but mimoLive’s biggest bottleneck is moving around video data. The unified memory structure and the bigger bandwidth should be a big help in that department. Also, more hardware codecs is great for encoding and playing videos.

Apple pricing on RAM and SSD makes going for full spec impossible choice for me. US$2k extra on top of $US2,500 just for upgrade to a serious video processor (24-core GPU Max), RAM (64GB Unified RAM) and SSD (2 TB) is kind of over the top pricing to me.

Typical Apple. I was ready to go to PC/Linux world before the shift to Apple Silicon was announced, and the speed of entry level Macs is incredible value c.f. intel Macs but IMHO Apple are price gouging on the high end Macs. Nothing new about that, but it’s frustrating that we can’t DYI, RAM, GPUs, internal SSD or any of it now. And Right to Repair (#R2R) is even worse than ever.