Use Zoom solo transition to show Custom Sized 1up?

I’m trying to arrange an interview show with a moving video background and colored frame borders around my sources. I would like to use the Split Screen layer for the slick automatic zoom in / out feature when switching between 2-3 ups to solo individuals.

What I would like to do is solo individuals without bringing them up to a full screen shot - ideally zooming in the 1up speaker to appear seamlessly within a 1up frame while still keeping my background video layer visible around the edges of the screen.

Is there another layer that would make this easier? I can add a border overlay to my source by playing with the Image Resizer filter but I can’t figure out how to use the built in solo transitions to not show the shot fullscreen.

Is there a better filter to use for adding a simple colored border overlay directly to my source?

I have experimented with using the overshoulder insert to push transition my video sources in/out but this gets a little clunky when I am trying to manage multiple sources at a time.

Overall I really like this software, but I would love to see more transitions available in general, where are my fade to black, dip to color, push in/out options for standard video sources? Am i just looking in the wrong place?

Any advice along these lines would be appreciated.

To your first question:
You could switch off the background of your Split Screen Layer: 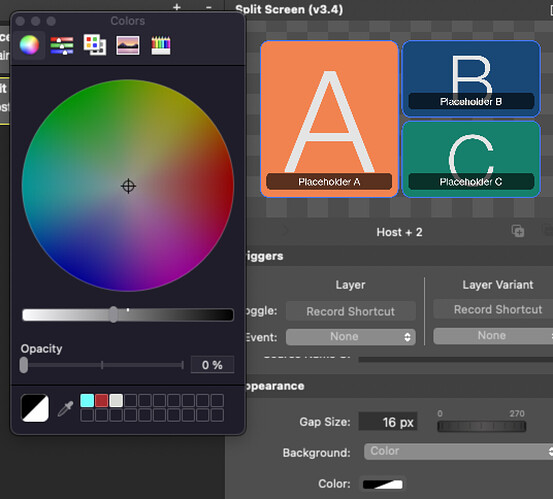 Find Background, click the color and set Opacity to 0%. Now it’s transparent. You can do this with all your variants of the Layer. Now: Underlay any other Layer to place your animated/moving background (maybe a pip-window-layer with several positions?

BTW: To the second question:
With PIP-Window you can design your own Spit Screen (including transitions/movements).

For every face use one Layer. Add variants for several positions. See this demo, how it works. You can add as many variants you want:

When it comes to the question about creating styles, layouts and designs, the majority uses tools like PhotoShop or Gimp. But this might be a more cost effective and efficient way for prototyping. The cool thing, everything is already inside of mimoLive, your Prototype also…

… The plus? Use the created prototype for your show. No extra fiddeling!

Remember: One Layer for each face/content. X Variants for your Positions of the faces. Combine every view in LayerSets.

BTW: With this layer you can create your own transitions.

Switch on the “MultiView” and add your Sources, to have smoot transitions. 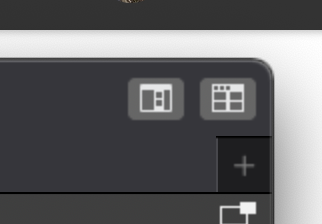 Ahh… thanks so much for your response. I had experimented a little bit with pip window but hadn’t gone far enough, that’s exactly what I’m looking for! I just needed to add in more windows and layer variants. My show build is coming along nicely, really appreciate the help!

There are so many paths we can go to get similar results. You’re welcome.