Ok. This is very exciting. I’m a video/livestreaming professional and this software is going to be great!!!

Is there a way for me to talk to my mimoCallers without my audio getting on the broadcast? Like an IFB or talkback?

Not at present, but I believe an upcoming release will have the ability to send custom audio mixes to a mimoCaller, which could allow this.

The main thing that will bother me with this is that, at present, in order to send a producer mic to a caller, it has to be Live in the layer stack with the volume turned all the way down. Then in the aux mix you need to do a manual mix to get the volume up. Problem with this is that you now don’t get any level changes during the show, as the aux mix is fixed.

Currently, one can mute an audio channel in an aux mix. It would be great if it was also possible to force on layers that are not live in the stack; or even not in a layer at all, just in a source.

Thanks for the information. Unfortunately I don’t see where you can route anything other than program to the mimoCallers. How is this done?

Hi @John_Mortensen I have a partial solution for you, and it might prompt someone to figure out a full solution.

There’s both Source input and Layer support for the Syphon framework which is a clever, low latency, low overhead way of transferring video from one application to another, or within the same app routing video. The only drawback is that it doesn’t have sound, but you could use it to pass text messages, LIVE tally light or whatever.

Apparently the audio routed to mimiCallers is “N-1” meaning “all tracks” (in the program mix?!) except their track (to avoid that horrible 0.5 second delay of your own voice when speaking).

To set up syphon add a Syphon Source, you can give it a channel name like I have in the picture below.

Then in the mimoCall source, you can change the video feed from the default “Program Output” to the new Syphon source. If you have multiple callers you can set multiple Syphon layers. Syphon works by sending everything “visible” or live below it (and no layers above it are transmitted by it). So if you have opaque layers between Syphon layers they will be discretely seen only by intended recipients. It’s a lot of stuffing around, but best I can think of. 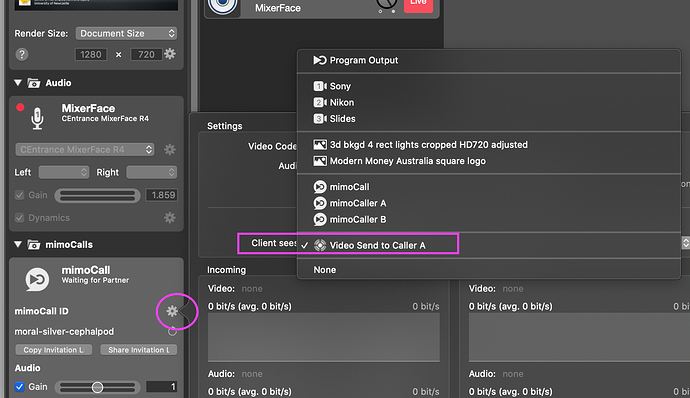 I believe Achim and Oliver mentioned routing independent audio sub-mixes is planned for a future release of mimoLive.

I wonder if this functionality would be useful generalised into some kind of “MimoTalk” talkback solution.

Being able to use commodity devices like iPod Touches for intercom/camera tally/etc would bring our overheads on intercom/tally rental way down.

(Yup, we’ve used Unity intercom, but I wasn’t convinced by it. Something that integrated with MimoCall, though… I’d pay for that.)

The current beta has the new IFB option. You can download it here:

I’ve just downloaded it and not been able to test/setup correctly yet, but sounds good to me and what you where looking for, as each MimoCall can have it’s own Audio Mix selected.

Ah, the beta does exactly what I need! Cheers devs

Could you let me know how you set it up?

I opened a new topic recently with what I’ve done so far, maybe you can help me out?

Hi all, I’m trying to figure out what is the best way to setup the IFB for MimoCall, but I’m not sure if I’m doing it the right way. What have I done so far: Created a new audio device (with the talkback mic) Added the new mic source to my Layer Stack and put it into Live Disabled the new Mic in the Program Mix Added a new Audio Mix for the MimoCall, disbled the MimoCall itself. Selected the new Audio Mix in the MimoCall Source. Am I doing it the right way? It feels a bit odd to do it this …

Thanks so much for this feature Devs

I tested this just now and I set it up for the ability to be able to hear a support member of the team. We use this for Facebook live and I want to be able to communicate with the person who is watching the stream as the consumer as well as replying to comments. We’d have to work through a separate calling tool or messenger app previously.

I then turned the volume on these layers down and set to live so that they were sendin audio but this can’t be heared on the programme mix.

With this set up we both hear the programm mix (Minus our own voices as the slight delay makes it very difficult to concentrate). We can also hear each other.

I haven’t tried this on a live stream yet to see if I need to adjust the levels so that the Paul can clearly be heard over the presenters or participants in the live stream.

Does anbody have any better ways of setting it up/ would do it differently.

I also realised that this may be useful for screen sharing. I’ve found that sometimes guests want to share screen and share desktop instead of a specific application window. It’s always a tense moment when I wait for them to do the share.

Now I can set up two mimocalls on their computer one that is doing a screen share and one that shows their webcam. In the past this means they would have had two sources of sound reaching each chrome window and would create an echo. I can now set one to be silent. This means I can now control the switch between webcam and screen share. It also means I can show both the presenters face as well as a presentation at the same time through MimoCall which I couldn’t have done previously. (This all obviously depends on peoples internet bandwidth as the guest is now uploading two video sauces.

I hope that is of use

gets tricky doesn’t it, but once it’s all set up and stable it’s amazing what we can do. the audio routing i find gives me the most headaches.

I’ve been playing with the new IFB option in MimoLive as well (version 5.8), but not able to achieve what I want/need.

What I would like to have, is the option the pre-fade talk with the MimoCall caller via my own mic and hear them as well. Currently I can’t figure out how to do this, as when I create seperate outputs for them, I can only control them by switching off the Master Levels for this output, which means the PGM Master Mix is not what they get anymore

Would be great if we could have the option to hear and talk to the MimoCall users in the background and leave the Master Mix untouched.

Maybe I’m doing something wrong, but for me the new feature does not work out yet

Anyone a good idea on how to use the IFB with MimoLive?