It was sort of touched on in an earlier thread here: Mix Minus on mixes other than Program Output

But after having run a few large-ish sized shows with 5-9 presenters contributing to the shows at different times during the show, I’m really feeling the need for a “virtual green room” … basically a show separate from the show where the presenters in the show that are joining via mimocall are put until they are “live” on the actual show. We try very hard to get everyone to join 10-15 minutes early but it seems inevitable that someone joins the show just on time or unfortunately sometimes late. As the producer, sometimes I want to be able to talk to individuals directly (or the group). Having a virtual “side room” I could prep the upcoming speaker or troubleshoot some technical issue. As well, this would allow a presenter to join at any time.

I know this is a big ask… but thought I’d throw this out there!

In absence of this functionality, what do others do to manage situations where there are multiple, non-simultaneous remote guests / “callers” in a single stream/show. We’ve tried using a separate zoom call for this, but the multiple connections for the remote guests becomes confusing to them.

Not exactly the setup you ask for, but for pre-shows, where we get all remote guests into mimoLive (most via Skype), we stream some recorded videos or full screen camera captures via a Blackmagic Design Atem Mini Pro switcher. We use this switcher for the connection to the streaming providers anyway as we found it is more reliable than mimoLive itself. So, setup will be from mimoLive to Atem Mini Pro, from Atem to the streaming provider. mimoLive delivers regular programming with all the features mimoLive is known for, connected to the Atem is a second camera and an iPad for recorded videos, stills and slideshows. After setup is done with mimoLive, we switch on the Atem to mimoLive as the source. Hope this helps.

Thanks, yes, we’ve started doing something similar but it would still be great to have a way to prep guests immediately before their appearance while the show is still going on.

Yeah it would be great since Livestream Studio 6 has this feature.
It’s really important to let guests know we can see and hear them. 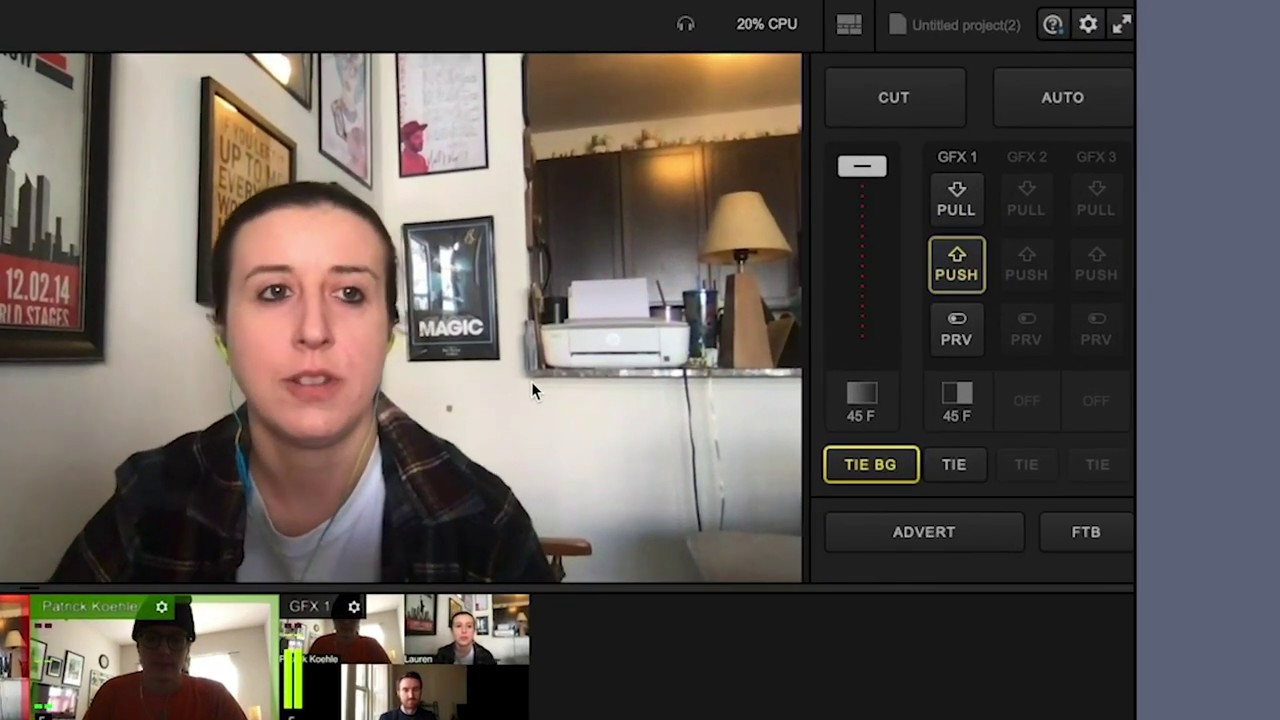 Ok, I love this software! Thought about the issue of a green room a bit longer and played around a bit. Came to the following configuration, that works in a brief test I ran. I suspect it may not work with more than a few guests on my current hardware but … IT WORKS! Wish that somehow there was a layer that I could add to make this work in a single document and simplify it a great deal…but IT WORKS! In theory anyway. ^^Disclaimer: I have NOT used the following for an actual live show yet.

This is probably more complicated than it needs to be BUT…I set up multiple documents.

This configuration allows me to talk to each of the guests in their respective document using the split screen in their document. They Can watch the show in the split screen while waiting for their turn and can hear the whole program. When they are being interviewed I change the guest document to be just the placer being the program output from the main program document, and then set the appropriate split screen and audio configuration in the main program document.

I hope I’ve explained this sufficiently so someone else can make sense of it. It took a fair bit of playing around. As you can imagine, the user interface for me the producer is terrible, and it would get exponentially worse with each guest, but it accomplishes the goal. Still hope for a layer to allow for green room functionality in a single document, but it is AMAZING that this works at all!!! I think If I decide to use this in production use, it will require a lot more work to streamline this. I think can use an automation layer to control the child documents from the main document but have not tried this yet!

@Oliver_Boinx will this configuration scale?? How much overhead does each additional document add?Obviously I could put each guest on separate hardware if necessary (it’s just money

) Thank you for making an amazing product!

Wow. That is some serious tinkering! Thanks for sharing.

I think it will not scale very well as there is a lot of overhead added with all the NDI sources and outputs.

Alternatively, it might be possible to wire this stuff with Syphon and Loopback. This would remove the video encoding/decoding overhead.

Hi @Kebbel i tried to test something like this for green room.
Of course 2 Mimo docs, one for main program and one for build up the green room.

IN the main document i have all the callers as sources.
Then i put placers in the layer stuck for each caller, resizing fo building a multiview, and on top Syphon layer.
the syphon will be help to send video feed to the second document where i can i add timings and other stuff,
Here i output the main feed in NDI so i can add as an NDI source in the main document and choose that source as a video return to the callers.
Audio in handles in the main document, both for n-1 and talkback for me as producer.
I attach some screenshots
Hope this helps
Tino 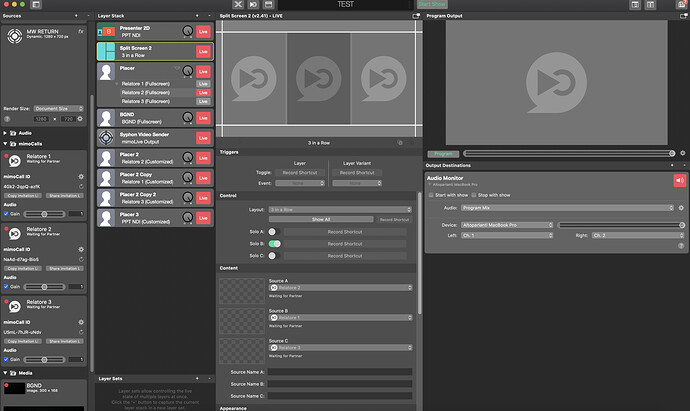 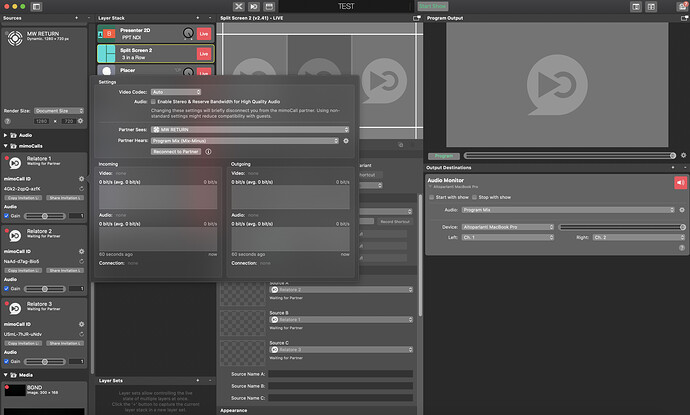 I’m desperately looking for green room functionality as well. Mimolive should be able to have a Talkback function and green room, so a producer is able to check incoming connections while on-air. I think with your solution it’s possible until it’s nicely implemented by Boinx

. Would you be able to share your documents as files here, so I can explore it further more? I have a 7 MimoCall show Monday and looking for a way to organize this all

Thanks for your help!

@KHlo sorry i got your message just now.
Hope you did it.
However instead of sharing the document maybe i will do a video which is better for explaining. This is something i just builded but never tested live. Especially i dont have any feedback from potential guests on MImo Call.

I’m very interested in this as well. I got my multi-document octopus of a solution working (using NDI) but I didn’t think it would scale (@Oliver_Boinx confirmed). You should be a guest on one of the official Boinx youtube streams!