Zoom, Mimo, NDI to the rescue

I had to do a 2-way zoom interview for the Iditarod. Host was in Alaska, guest in Norway.

Host was using broadcast camera and microphone via Intinor 600 encoder to send me feed.

I received the camera feed via sat uplink into an Intinor Direckt Router which feeds MimoLive via NDI.

I have a Mac mini running as Zoom Room. Needs to see a “camera” as physical connection.

I feed NDI from host into a Magewell NDI-SDI decoder, and feed that into Mac Mini via AJA UTAP.

I output each speaker as NDI from Zoom Room back into Mimo on Split Layer with separate audio.

At last minute Alaska host wanted to add local guest. So we did two shot on location, and I cropped as 3 box in Mimo.

The 2 local hosts dialed in to zoom on mobile phones for IFB and program (muted). I dialed in for cues.

I used second Mimo to send return video from Mimo 1 into same zoom for program return.

It worked great, and I was pretty proud of myself for figuring out 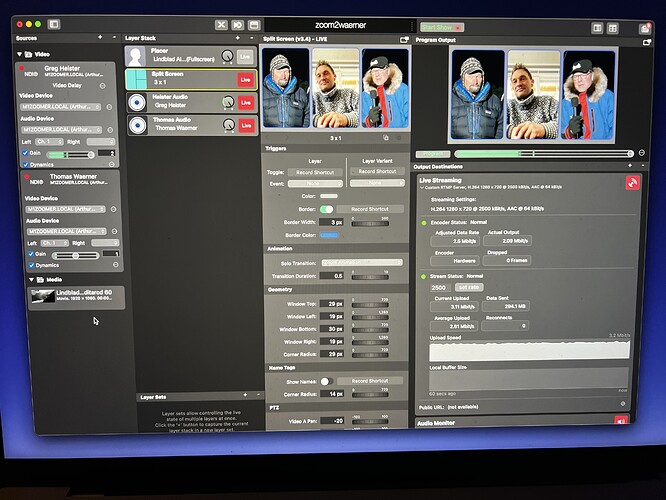 This job has many new challenges everyday.

Today the host of the show was in a remote village and not able to generate more than a voice call.

My setup for using the zoom room didn’t work, since the input to the room host must have audio and video to work. I though having host call in, using the audio to send out over ndi might work with a photo added in Mimo.

It didn’t. But the solution I came up with did. I used another zoom call on another laptop to bring in host audio. I sent audio via LoopBack to a second Mimo instance, and added a photo and the audio as layers.

I sent an UltraStudio 3G output from Mimo into Zoom Room system via same UTAP sdi. Room accepted that and the show went on.

You can never have enough laptops br Mimo licenses!

I know exactly how you feel with this. I had lots of huge documents and challenging setups. Now, most of the time, I end up with a simple screen capturing of zoom with speaker view provided by zoom.