I just took a look at the latest update and can confirm that the opacity function for text backgrounds is working.
I was able to save a text box as a snippet and this created a new My Snippets folder. There should, however, be a way for snippets created in v5 to be added to this folder easily.
It would also be helpful if a single frame in a slideshow could be highlighted and a snippet created from that. At present (and as in v5), to create a single frame snippet you have to copy and paste the frame into a new slideshow.
It is still not possible to create a mask from whatever image is in the frame. And if you select, say, left hand side of the frame, you cannot drag the corners or sides to customise it; everything moves in ratio.
I leave others to comment on other new or improved features.

I haven’t played around with .19b much at all since this morning, but addressing your last issue of adjusting the mask there IS an answer for, but I have seen an issue with it since the early beta releases and it’s still there.

What I’ve suggested though is that while you move the corners or edges on the stage, that the Width and Height sliders an their values move and change accordingly. It’s difficult to reconcile the numerical values showing in the sliders with the actual size of the mask on the stage since the numbers ONLY change when you move the sliders, but not the other way around.

Will play around with .19b some more today when I get some time.

The main problem with Mask so far in v6b is that there is no option to select the image as it appears on the stage. In v5, you select rectangle and the mask snaps to the edges of the image whatever size it is: 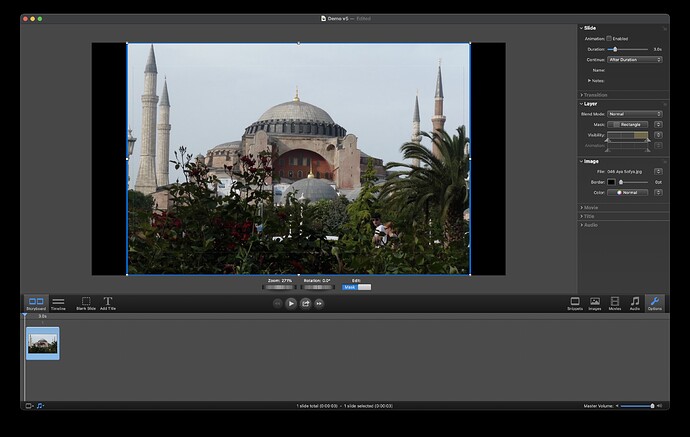 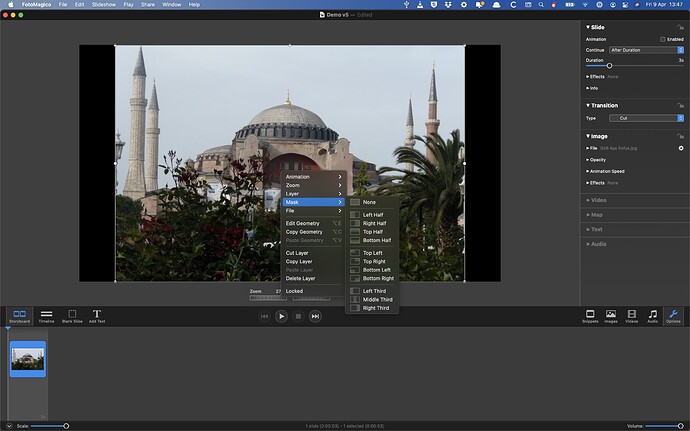 Agree on all counts – I’m sure Peter will get it fixed before a final release. You’d think that if it was working in v5 it would work the same in v6 (or at least us users would expect that) – just grab the code that made it happen and paste it into the new version where it’s supposed to go

But talking to Peter it’s not that simple.

Once the masking feature is sorted, I might finally be able to make a complete slideshow in V6b. At present, when I use the Animation Assistant to set the zoom-in and zoom-out to alternate, the entire image expands or contracts and this is not what the Ken Burns Effect is supposed to do!

One reason I don’t like the Ken Burns effect – it’s my own personal opinion, but it’s overused. When we create a slideshow, we let the music set the mood, and have it enhance the show. We rarely narrate, and we don’t do any voiceovers. If a slide looks like it could be enhanced by doing some type of zoom-in or zoom-out or pan, THEN I’ll manually apply an animation to accomplish that (like moving up an inclined trail, or down some steps, or closing in on some element of the photo). But when I watch a Ken Burns movie and see images slowly zoom in and slowly zoom out or a combination of the two on almost every single image, I get bored and distracted. Most of our slides are static – they don’t move unless there’s a need to – OR – to break up the same type of monotony of static imagery by including some type of transition or movement. It’s all a personal thing.

Stan, I think you are right. I started using the KBE at first. Because I could. I stopped using it, then started again. But you have persuaded me to stop! I haven’t finalised my 2008 trip to northern Peru yet, but will re-edit what I have done so far to take your comments into account. There are definitely some slides where I can pan up a staircase or something like that.
Mostly, I just dissolve between slides, or fade if I move to a new location. I have also used a fancy wipe occasionally and also cuts for dramatic effect.
As I have said before, my slideshows are all on YouTube. Very few people bother to watch them, but that doesn’t bother me…
By the way, someone told me the other day that there is a new Ken Burns documentary just out: on Ernest Hemingway. I wonder if he himself still uses the KBE?

Yeah, my wife recorded the Ernest Hemingway documentary and was watching some of it yesterday. There was the KBE (although I will admit that not EVERY image had it applied). But it did get repetitious and boring when it was there. Ah, well…

Started making a slideshow in v6b. In the provided snippets the text placer is not replaced with one’s own name. However, this maybe because it’s a beta and therefore not licenced to oneself.