Mostly posting this so others will be aware. I recently purchased all of the same equipment that Apple is selling as their eGPU VR Developer Kit. A Sonnet eGFX breakaway box and AMD RX580 GPU. I have hooked these up to my 2016 MacBook Pro and they work as expected. Nearly anything run from the external monitor hooked into the eGPU directly is accelerated by the eGPU and not the internal.

I bought this as a test unit (I knew that it wasn’t officially supported) to see if I could offload the GPU work from mimoLive to the eGPU to reduce internal (to the laptop) heat load to prevent thermal throttling after long stream sessions and possibly to get a little performance boost as well since the RX580 is significantly more powerful than the internal Radeon Pro 460. Unfortunately, at this time mimoLive does not appear to be offloading the GPU work load to the eGPU even after tinkering with various setups and settings in the Debug menu, running mimoLive from the external monitor, and setting the external monitor as the primary display.

I will attempt to keep this space updated as I work through this with the Boinx devs.

Thanks for trying and posting this, I’ll keep an eye on it as it might be something I’d like to try in the future.

Bump Up. Hoping mimolive will be able to take advantage of eGPU

Also, if I recall correctly, you have to tell MacOS to prefer eGPU by right clicking on the app > Get Info window.

I have the Blackmagic eGPU attached to the 6-core Mac mini for my studio and it works beautifully.

You can (as Bastien said above) bind an application to use the externalGPU. It looks like this in the Get Info box for the application.

Additionally, there is a shell script available that lets you modify preferences for the eGPU across all apps, or specified apps: https://github.com/mayankk2308/set-egpu

mimoLive works really well with the Blackmagic eGPU in my experience.

It is not a very high-performance GPU though (Radeon Pro 580), so your mileage may vary. It’s certainly better than the low-end integrated systems.

I have the Blackmagic eGPU attached to the 6-core Mac mini for my studio and it works beautifully.

Hello @wibbly, thanks for sharing your experience.

Just these days, I’m considering what equipment to buy to stream from my MacBook Pro 13" (2020). Since it only has an integrated graphics card, I’m thinking of pairing it with an eGPU.

Could you please share a bit more details about the improvements you got adding the Blackmagic eGPU to your Mac mini? Is mimoLive intensively using the eGPU?

I Almost pull the trigger in buying the Black Magic eGPU…
but during the last WWDC, apple announced a totally new hardware using their own chips… that promised the world for computing and graphics…

so I am holding back on that…

I sincerely hope @Oliver_Boinx get a head start and get the early developer’s macmini
This should be awesome!!

just got a razer core x and a radeon 5700 xt video card as eGPU, plugged into my 2017 13" macbook pro and oh wow! mimoLive does take advantage of the eGPU. apple recently added this a few months ago:

Glad to hear that it works this great for you. Yes, the eGPU makes a big difference if the Mac you’re using doesn’t have a discreet graphics chip.

Hi, Right now I am facing the choice of buying a mac mini 2018 + egpu with 5700xt specifically for mimolive tasks. Can you roughly estimate how much more powerful a MacBook Pro with egpu than without? As a percentage, for example, a rough estimate, + 30%, 5%, 150%?

The only approximately objective way to tell is to look at benchmarks. https://browser.geekbench.com/mac-benchmarks

From the benchmarks I would estimate that the Mac mini is roughly twice as fast as the MBP 13.

The performance gain of the MBP with eGPU compared to MBP without GPU depends on what part of mimoLive you look at. You could start by comparing the benchmark results of the graphics cards:

So roughly about 12x for graphics operations.

did, funny thing we’re on the same boat. Planning to get a mac mini 2018/2020, manually upgrade its memory to the max 64gb (cheaper when buying the memory chips on amazon than getting the upgrade from apple) + egpu 5700xt. but there’s a new mac mini as just announced with the new M1 processor which looks promising. i can see the advantages of the M1 as an SoC where the processor, GPU, neural engine and memory are all on the same chip, even at just 16GB max memory. If boinx will take advantage of the new implementation of metal in accelerating graphics and GPU rendering especially on their visual effects, lower thirds, etc. for this new M1 chip, it should be much faster and smoother on the workload for the mac itself with less time to process those tasks. i am sure in the next software updates of mimolive, and apple committed itself to not use intel or other chips anymore but only theirs, i could not see the advantage of an eGPU in the near future or if it will still be supported. I believe they just added the eGPU feature because apple was scrutinized before for releasing an underpowered and expensive macs at the time especially when they released that trash can design mac pro where you could not even upgrade the GPU which was not even the top of the line GPU at the time.

Back to eGPU, now, there’s an issue with an eGPU called a thunderbolt cable bottleneck. basically, the data comes from the CPU to the GPU, and then it has to go back to the CPU when you’re exporting or live rendering a video, that’s why you’ll see a high CPU usage as well when your eGPU is working. So it takes a longer route for data processing. I notice this as well, my poor 2.3 GHz Dual-Core Intel Core i5 on my 2017 MBP was almost at it’s peak continuously even with the eGPU connected while rendering 4k content + logitech c920 webcam + mimoCall layer enabled at the same time which was pretty smooth even though i believe most of the process for this workload should be done by the GPU. But when both the CPU and GPU is integrated, there won’t be any travel time or delay for the data, the CPU could probably just say, hey GPU no need to go through me, here’s an instruction and just process that data that is meant for you.

But i have to ask the CEO, @Oliver_Boinx, will you be taking advantage of the new M1 processor and its features like metal, AI, with your software especially mimoLive? or is it still better to stick with the current lineup of intel based macs plus the addition of eGPUs?

Oh, and the reason i needed the eGPU is that i have 4-24" monitors + the macbook pro screen so total of 5 screens. 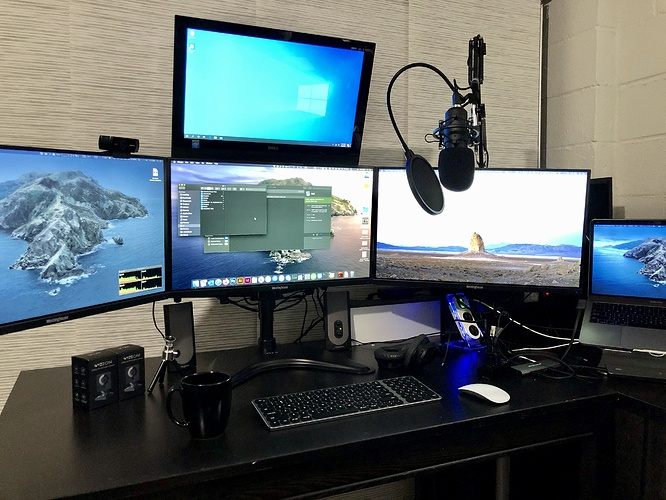 Eventually, we will take full advantage of the new Apple Silicon chips. At this time, mimoLive works on the M1 based computers, but uses Rosetta 2. Also, Blackmagic and NewTek are yet to release updates to their drivers, so Blackmagic devices and NDI cameras don’t work right now.

The M1 is a pretty powerful chip. We’ll have to wait for first real benchmarks, but I doubt that the Mac mini M1 reaches the same raw performance as the Mac mini i7 with a Radeon 5700 XT eGPU. I certainly don’t expect the M1 to outperform the i7 when running mimoLive for now.

We have several M1 devices on order and I will certainly let you know what real world performance we see when we get them next week.

that’s good to hear. i guess upgrading my 2017 mbp with the i7 mac mini 2018/2020 + an eGPU with Radeon 5700 XT still would be a powerful machine for many years to come compare to the new M1 Mac Mini. Also, I just noticed, the new M1 Mac mini only has 2 thunderbolt/usb-c ports so that is a huge disadvantage compare to 4 from the intel mac minis. It seems (maybe? probably?) the M1 can only handle 2 usb-c thunderbolt ports? same as the new m1 macbook air and pro which also have only 2 ports.

Apple have confirmed that the M1 based machines will not be compatible with eGPUs. 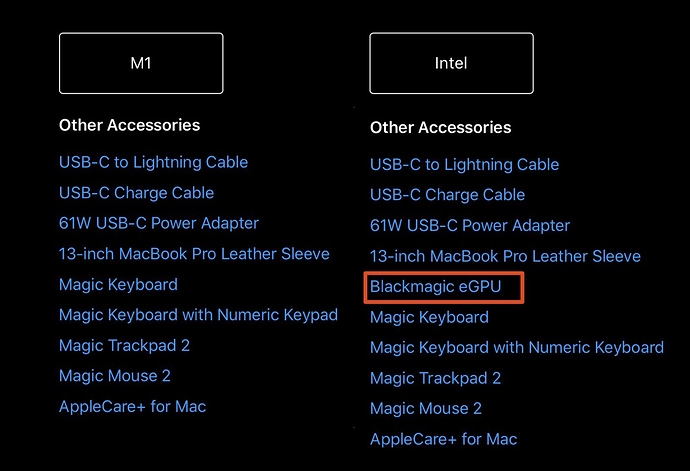 Apple's new M1-equipped MacBook Air, MacBook Pro, and Mac mini do not appear to be compatible with eGPUs, including the Blackmagic eGPU that...

Hi @Oliver_Boinx, it’s been a few months now and i am sure you have your m1 mac minis now. have you had any chance on comparing the spec’d up m1 mac mini (16GB RAM) and a spec’d up 2018 mac mini with 64GB RAM + an eGPU with a Radeon 5700 XT on mimoLive? If so, can you share performance comparison?