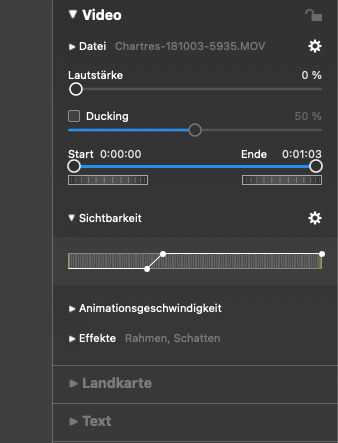 So if I understand correctly, you’re trying to START the video “later” in the slide than when the slide actually starts – for example 5 seconds AFTER the slide begins, but NOT 5 seconds into the video? I know you can adjust the visibility of the video, but that obviously doesn’t adjust its start point (it will start at the same time – the beginning of the slide – but it only begins to appear as the visibility is increased). And I know you can adjust the In and Out points, but again that doesn’t change the start point within the slide itself – that only adjusts when the video starts within the duration of the entire slide.

There are almost always various ways around the app to get what you want, trying to do things that it doesn’t do. But if you want it simplified, suggest that be added as a feature.

thanks stantastic for the replies.

The background is the “illustration” of the route and one of the “images” is a video.
Therefore I cannot put a dummy picture in front of it, because all pictures / videos are on top of each other. (see also the picture from the question “numeric entries for effects”)

So what I’m guessing is the small images you have placed along the route are supposed to appear as the route is animated along its length (thus your question about “numerically” wanting to adjust their visibility) – BUT ONE of the images is a video and you don’t know how to start it up when the animated route passes by that image (which will NOT be at the start of the slide). If that’s the case I can understand the problem.

Yeah, unfortunately, the way you are presenting the images, the map, and the route, I don’t think it’s possible. I mean, it’s NOT possible to start a video part way through a slide’s duration.