when experimenting with the Snippet “2 Vertical” from “Splitscreens collection” a multiple replacement of an image causes a 90 degree rotation each time. 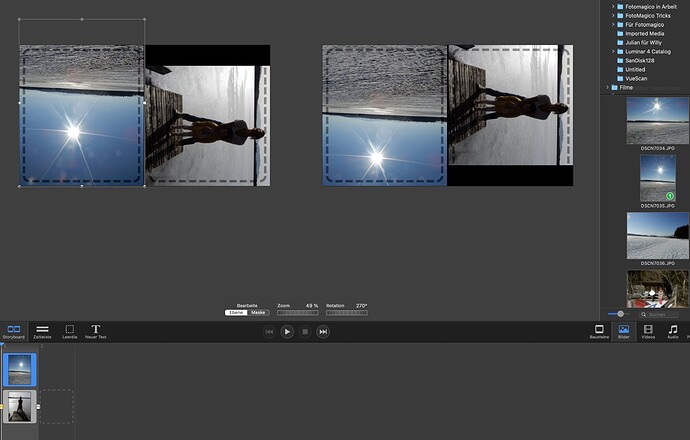 Hi, willyman – I tried to reproduce this, and I can IN SOME INSTANCES, but not all.

FM has dealt with rotated images “inconsistently” for a long time. If I just drag a vertical image from the Image Browser into a slide show all by itself, it MAY – or – MAY NOT place the image correctly, but I notice there might be a 90° rotation showing on the Rotation scroll wheel even though it displays upright. I placed a vertical image on a slide by itself and it came in oriented correctly, but showed a 90° rotation. I then placed the same image into the “2-vertical” snippet and it got rotated 90° (and the scroll wheel then showed 180°). I took ANOTHER vertical image and placed it on a slide by itself, and it also displayed a rotation of 90° even though it was upright. But when I placed it into the 2-vertical snippet, it did NOT get rotated (and still showed a rotation of 90°). It is not consistent.

I’ve seen this problem over the years not only with FM, but just importing images in general onto my computer. Obviously to take a vertical image you usually rotate a SLR camera 90°. But SOMETIMES when I import that image into a folder, it comes in oriented correctly, and sometimes it comes in 90° out of phase. I never did have an explanation for it. There must be something inherent within the file itself to cause the discrepancy, but I’ll be damned if I know what it is.

I have a feeling that if you ask Peter to make some type of correction, it will still continue to rotate images 90° based on something uncontrollable by FotoMagico itself. Just my opinion based on experience with vertical images. I’ve NEVER seen a landscape photo import incorrectly – it only affects portrait shots.

Sorry, then – I’m not sure what else to write. Maybe it IS a fixable glitch – if you send Peter some feedback I’m sure he’ll take a look at it.

Thanks for reporting. Will be fixed in b42.