I don’t know if this possible, but I want to start some rolling credits about half way into the last slide, but continue them into a blank screen to end. Anyone know how this can be achieved? 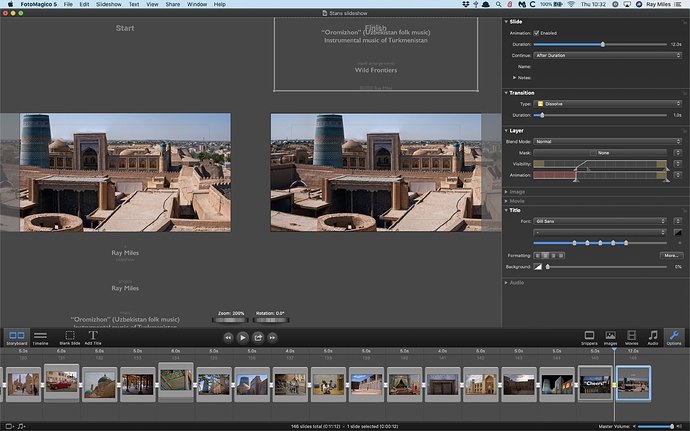 Change the “visibility” of the layer containing the photo image on the last slide that holds the credits down to 0 half way through the length of the slide. You can either have the visibility drop off instantly (it’s there one instance, gone the next) or adjust the two small sliders on the right so that it slowly fades out. 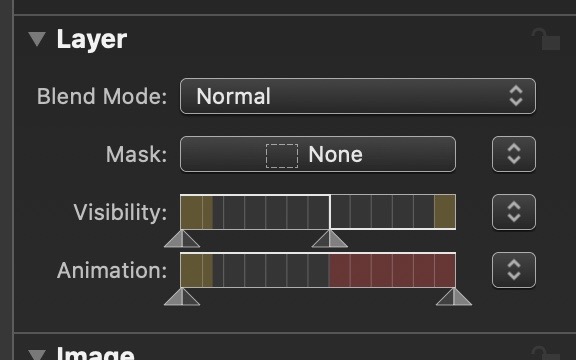 Thanks Stan. I thought it would be something like that, but just haven’t worked out how those visibility and animation sliders work. Like so much with FotoMagico, they are not very user friendly!

Well, they are “semi” user friendly, just not quite intuitive

I have asked for a number of simple changes over the years to those sliders, but so far I haven’t seen any implemented.

I’d like for the sliders to “snap” to the little vertical timing lines so it would allow more accurate timing adjustments between layers or different slides. Or the ability to enter actual timing values into some text boxes so things could be controlled down to the second. Or the ability to add MORE THAN ONE fade in or fade out control (if you want to, for example, fade a slide in, then out, then in, then out again on the same slide you can’t do it). You have to do workarounds – like creating more than one slide and adjusting timing, and layering, and…well, it becomes messy.

For such an expensive piece of software it’s very clunky, and there are many bugs. Does it ever get updated? The copyright details are 2004-2017, so that’s three years ago.
I almost wish I hadn’t laid out on it and taken the option of using iMovie to create slideshows.

The latest update was in January of this year, 2020, just before the global pandemic. Regardless of COVID-19 and the nightmares it has caused, the guys at Boinx have tried their best to deal with issues that have come up regarding the software. I don’t think they foresaw ALL of the different ways people have found to use Fotomagico. I believe in the beginning it was just intended to be a tool to create simple straightforward slideshows, but obviously people want to do more once they see what it CAN do. Over the years they’ve added features to deal with audio tracks, added layers, animations, masks, importing of .png files to deal with transparency, etc. I’ve been a Mac guy since 1984 and have distanced myself from anything “Windows.” I know Pro Show Gold used to be the top-of-the-line slideshow presenter for the Windows OS, but it just did TOO MUCH (which has now been replaced with Photopia, which IS Mac compatible)! And people took advantage of that to make, in my opinion, “busy” slideshows, with fancy eye candy effects that again, to me, actually detracted from the images themselves. Oh, I am SOOOO tired of the Ken Burns effect on each and every slide. So, I was stuck trying to find an app that worked on the Mac, and after a bit of research, I felt Fotomagico filled my needs. And it has so far. Yes, I’ve had to come up with some creative ways to deal with some fancy things that I would like to do (short of glittery and rotating and dancing text effects and over-the-top swirling and spinning and who-knows-what-else effects on images). But I still think Fotomagico is one of the best slideshow creators out there for the Mac OS.

As for iMovie – yes, I was using that BEFORE Fotomagico was introduced. And it does do some things easier and/or better. But there are also some things it can’t do – and that’s why I gave it up.