Thank you for the great job!

Hi @AndreSantos Thanks for the feature request.

I’m curious about how you use mimoLive. Can you post a screenshot of an example document?

The core concept of mimoLive is that the Layer Stack controls the output. This means that the media control buttons belong in the layers.

What is your use case for playing media directly to the output destination?

Hello @Oliver_Boinx.
The use case is to be able to use mimolive to send contents to a videowall during one event for example.
We mostly use the production software to send some blackmagic decklink outputs to our blackmagic studio production switcher with videos to be able to use them during the event and to be able to send the finished “product” to the web via stream.
We can, for example, have an intro’s, outro’s, videos, etc., and the person who is directing the event is able to place that signal live and in other screens in the venue.
What i was wondering is that if we had media controls on the source side, perhaps, we could have a better performance from the graphics by not putting another layer. I am assuming that placing a layer increases the work from the graphics cores.
Let me know if you need for me to explain in better.
Will try to make a sketch on grab a screenshot.

Hi @AndreSantos A sketch and/or screenshot would certainly be helpful to fully understand how you use mimoLive.

The graphics load is actually not that big and adding a layer that isn’t live doesn’t add to any work load.

Hello.
The media are just for placement.
The idea is there. 2 media files playing out thru the decklink outputs.
Since the load is not that significant, turns out it would be more like a faster access to the controls. 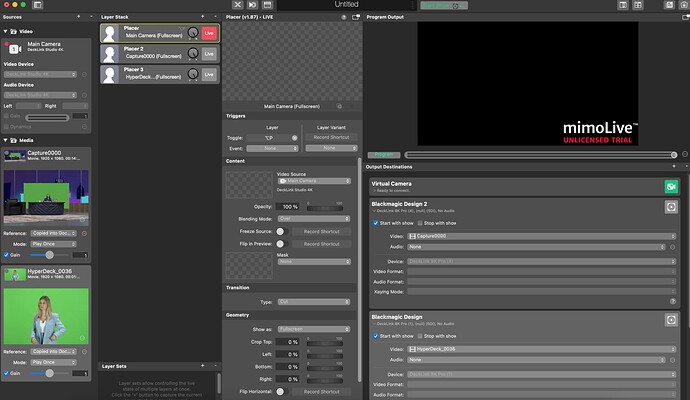 Thanks for posting the screenshot and for clarifying your idea.

Do you use the Remote Control Surface? Would putting the media control buttons on the surface be a good idea?

It’s not a part of the setup.
I would say that the idea of having the buttons on the control surface would be a good idea also.
Our use case is a minimalistic setup so we avoid using more hardware.

You can use the Remote Control Surface in a browser on the same computer. Then you don’t have to interact with mimoLive UI.

Thank you for the suggestion.
Will take a look on it.