Beta tester Adrian reported, that finding features like Mask, Border, Color Correction, etc… is a little bit slow since some of them are hidden in the Image>Options subgroup, while others are hidden in Image>Effects subgroup. It usually took him two tries until he found what he was looking for. His suggestion was to move everything into the Effects group, since the somewhat artificial distinction between pixel level effects and other options like mask doesn’t really matter to the average user anyways.

So I tried two different versions. Version A is what we have right now. 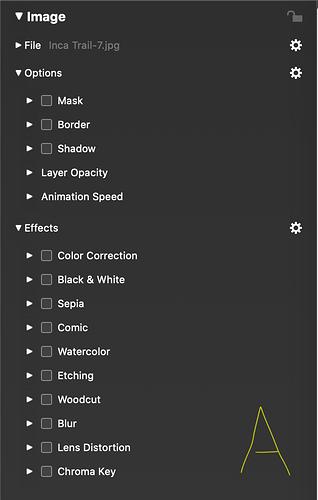 In version B I moved Mask, Border and Shadow to the Effects subgroup. 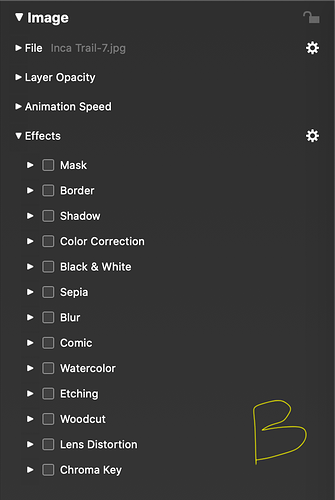 Since we at Boinx engineering cannot agree internally which version is preferable, we figured we would ask you which version you think provides the better user experience.

I’d definitely prefer option B, that’s how I wanted it to look like

If you went for B then please move mask out as well. as its not really an effect but a design structure

Option B is better, I think.

Oh, boy – I looked at this and then thought about it “semantically” – regardless of whether these are “pixel effects” or “design effects” they really came down to (IN MY OPINION) ALL being some sort of “effect” applied to an image. So, what I’m suggesting is that adding a mask to an image is equal functionally to adding a woodcut effect to an image. If that idea follows, then even “Layer Opacity” and “Animation Speed” are ALSO effects, so why would they be delegated to drop down options on their own – why not include THOSE in the Effects section as well? And if it came to THAT, then why have an Effects section at all – EVERY option shown (Layer Opacity, Animation Speed, and EACH of the effects under the Effects sub-menu) would just be shown in a long list in the Image section itself (i.e., nothing would be separated out and they all appear at once). That WOULD eliminate where to look for any of the options the user would want to apply – they’d all be displayed as soon as the Image drop-down arrow is clicked.

If that argument doesn’t seem to appeal to anyone – then I suppose I would go with the NEWER Option B. Sometimes it just comes down to learning how a tool works (which FM itself is) and once you learn how each aspect of a tool is utilized on a regular basis it becomes second nature to you.

Having everything at the top level has two negative side effects:

• The list is very long and intimidating for novice users. We want to offer some kind of progressive disclosure, so that novices are not intimidated by too much complexity, while advanced users can discover the additional functionality at their own pace.

• Having everything at the top level makes the list very long (always) - which would require a lot of vertical scrolling on small screen (e.g. internal notebook screens)

Agreed on all counts – forget I mentioned it

Then STILL go with Option B (maybe you should wait for more input from beta testers!), although you’d have to unfortunately redo the tutorial

(uh, oh – the forum editor removed my right-arrows, so I replaced them with dashes!)

I don’t think that the list is much longer, only about three dots which is not that much imho. And I also think that Option B is easier to use for novices. There is no real difference in “options” and “effects” in user experience, it’s only a technical difference. For me it only counts that I am adding any effect to my picture and mask, border and layer in terms of “manipulating” a pic is an effect.

I also go with @stantastic that Layer Opacity and Animation speed also is kind of an effect.

In the end I am looking for an UI which speeds up my workflow. I personally most am using Animation speed and sometimes Layer Opacity, rare times mask and nearly no times any other effect. So I want to a have a quick access to those I am using more often.

So what do any other testers are most using and need quick access to?