I am putting together a small title sequence that includes four layers. Two are background images that have animation and need to be animated the entire time. The other two are titles and I would like them to come in at two different times and extend to the end of the clip.

I have fiddled with the timing sliders, but cannot seem to get it right. Currently the background image does not start animating until the first title layer starts and the clip ends abruptly when all four layers are in place.

I post post images to help show what I am trying to do, but thought I would see what information would be helpful from this board first.

Would be great to SEE what you’ve done, so trying to help makes it a bit more difficult. AND, you don’t say what version of FotoMagico you are using (there are two different ways to manage the same thing between FotoMagico 5 and the new FM 6).

If a slide has animation, then each layer’s animation timing can be controlled AND the opacity of the layer as well. Normally the opacity of a layer defaults to 100%. After enabling animation, click on each image layer and adjust its Start parameters on the left of the stage (set the Zoom Level and move the image to where you want it to start), then do the same for the Finish on the right side of the stage. If both images are to be seen at the same time, leave their opacities set to 100%. You don’t say that you need to animate the titles, so I’ll assume they stay in place the entire length of the slide, but you want them to show up at two different times. Assuming you’re using FM6, for the first title, select its layer, then in the Text panel on the right go down to the Opacity option. Move the top left control point to the right (to some spot along the length of the adjustment where you want the title to appear). A new point appears at the bottom left of the slider. Now move that bottom left point to directly under the point described above. The Opacity will now be 0% until it reaches the vertical spot you just created, and then immediately go to 100% for the rest of the slide. If you want the title to fade in instead, just adjust the bottom point to the left and create an upward slope from 0% to 100%. Now do the exact same thing for the second title, but change it’s 0% to 100% opacity curve to come in at a different time during the slide length. You’ll have to adjust the timings depending on when you want each layer to appear. Since you want the titles to appear until the end of the slide, don’t adjust the right hand opacity adjustment. The title will appear, then stay 100% until the end of the slide.

To do the same thing in FM5, in the Layer Option panel on the right is a “Visibility” slider. You’ll do the same thing by adjusting the little left and right triangular pointers under the slider. For what you want to do, again you can make the title appear instantly by adjusting the left and right triangles to abut each other, or move the left one to the left of the right one and create a gradual fade in. Again, don’t touch the right hand triangles to keep the title displayed until the end.

The advantage of FM 6 or FM 5 is that in FM 5 you can only create a single fade in and a single fade out adjustment. In FM 6 you can create multiple ins and outs by just adding multiple points along the time length and adjusting them as appropriate.

You say the background image does not start animating unit the first title layer starts.But each layer is independent, so they should match how you have the animation sliders and opacity set for each layer.

Sorry if that’s wordy – hope you can follow it. Try it and see. Good luck.

I will try with the above, meanwhile here are some screenshots:

Four layers
The bottom swirl is just a constantly moving rotation
The buggy image is a constant slow rotation and slight zoom
The titles are supposed to slide in one from the right and one from the left. First the one on the top right, then the one on the bottom left resulting in both titles complete and then there would be a few seconds of just everything in place before the slide ends. 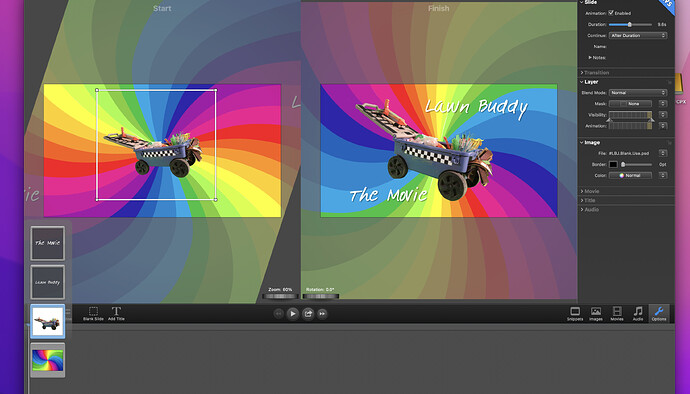 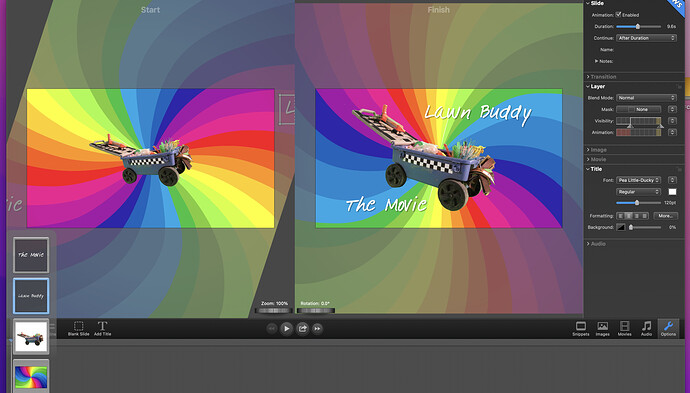 Geez, I just upgraded to FM 6 and it all got easy! The animation sliders make more sense to me than they did in version 5.

Everything is the way I want it EXCEPT one thing. I want the titles to move into place and then have a few seconds of holding before the slide ends, but it seems no matter how I adjust the timing sliders, the slide ends as soon as the titles crawl into place?

Glad you got most of it working using the newer FM 6 – it really does have so much more to offer than the previous version, Are you doing a Cut transition from slide to slide, or a Dissolve? The transition time affects the way the previous slide animations time out. You say no matter how you adjust the sliders, the slide ends as soon as the titles crawl into place. To make the titles last longer during the length of the slide, you’ll need to bring them in sooner. If that doesn’t work, you’ll need to lengthen the slide duration itself. It becomes a balancing act between the length of the slide, the duration of the animation within the slide, and how fast you want the animation to last. For example, if the slide lasts 10 seconds and you bring the title in at 3 seconds and animate it from start to finish in 7 seconds, it will end its movement at the 10 second mark. If the title comes in at 3 seconds and animations from start to finish in 5 seconds, it will move FASTER during the length of the slide (it covers the same distance in less time), but it will display at the end of the animation movement for an extra 2 seconds.

From the images you posted the only one that shows animation control points is the last image (the “The Movie” title). I’m not sure why the others aren’t displaying control points. Now that you’re using FM 6, it should show control points for each layer for animation and opacity.

You’ll have to keep playing with it until you get what you want. Hope that kinda helped