I have just installed the latest beta b15 as soon as i try to create a slideshow or open recent it crashes. 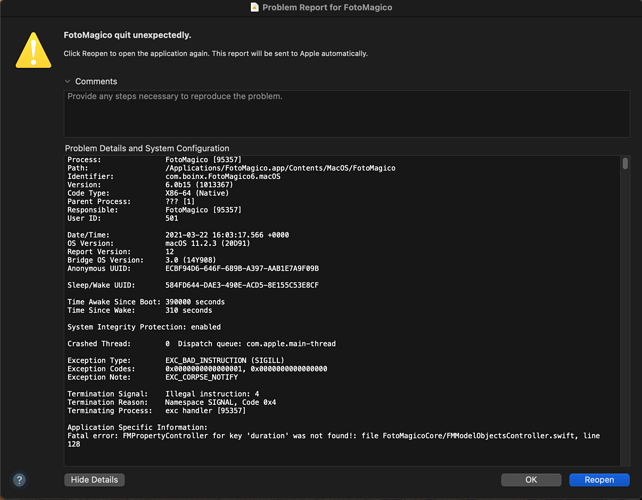 No crashing when I open and edit an existing or create a new.
Might be your OS. I am on the latest Big Sur…

I cannot reproduce this, I have opened new slideshows several times and inserted pictures, videos and music (FM6.015, iMac Big Sur V11.2.3) without problems, even with existing files.

Dang, not what I wanted to read, willyman

To JoPhi – this thread IS in the FotoMagico 6 Beta section.

Yes, someone moved it to the sub category.

I should add that when I first opened 6.0b14 this morning it said there was a new version and asked if I wanted to install it, but I said no, quit 6.0b14, copied the 6.0b14 app to another location, then restarted 6.0b14 and it DIDN’T ask to update. So I MANUALLY performed the update to 6.0b15, and reported the crash errors (same as speacock110). I don’t know why it did that, but that might be why it happened. I think I might try doing an AppCleaner cycle, then try a re-install – see if that does anything. Will report back.

Nope, didn’t work – completely new install of 6.0b15 after removing all prefs, plists, etc. and it still crashes on trying to create a new file, or clicking Options on an existing file, or trying to edit text. Shoot…

Hi, JoPhi – okay, sorry. Must have missed it originally. I saw this post early this morning, then was out most of the day and just got back home an hour ago — guess it moved.

So figured I’d try updating to 6.0b15 again today. Used AppCleaner (again) to clear out everything relating to FM 6. Then decided I’d try a system shutdown and reboot (you never know – there could be something hanging around in memory causing a problem). BUT – the latest update STILL FAILS. I get the splash screen, but trying to create a new document instantly crashes the app. Opening an existing doc still works, but trying to do anything with it – NOPE!!

Guess I’m stuck on trying to beta test for the moment, since no need to test 6.0b14 anymore – it’s already obsolete. And I DID want to see how the new changes were working.

Will have to wait for the next iteration and see if that works. Sigh…

b16 is coming today - this should (hopefully) fix the crash…

Thanks, Peter – I’ll be here

Just installed b16 and thought i would test Cmd-Z which now works on a none saved image. But in trying to add and image from Photos if I select Favourites, Shared or Albums it crashes. I can add a photo from the top level but thats it.

Addressing speacock110’s issue above, I don’t use iPhoto, but I do have some photos in there to play around with. I don’t have any files in the Favorites or Shared folders, but those in the Albums folder I can drag and drop into the timeline without crashing (not sure I’m doing it exactly as he did it).

Click on any of the highlighted and it crashes. But if i Select the top level Photos I can drag an image in no problem. 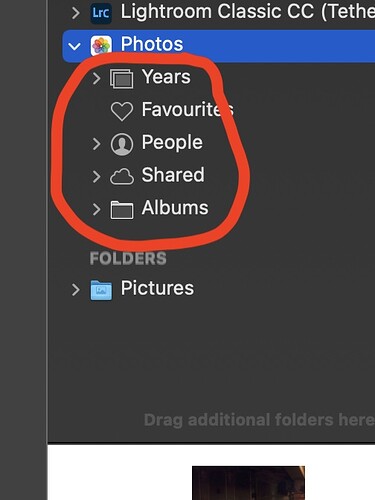 Okay, I see now. Yes, if you click on the NAME of the submenu, the app crashes. But if you drill down through the drop-down arrows to each of the images in their respective groups, then it works.

Yep, another bug – I’m sure you reported it