OK, I thought I should start a new thread here, as I have already encountered several issues when using the beta.
I have added a title to a slide and have selected a black background. But I want to reduce it to 50%, but can’t see how to do it now.
When I click on the wheel icon, the app crashes.
The alignment buttons all have ? on them.
I have to reset point size and black rather than white background for each slide, as it doesn’t remember my previous settings.
I de-selected animation in the first slide of a sequence, but for the next slide it was re-selected. I don’t want to have to do this manually every time I add a new slide.

It’s nice to be able to see other people having problems with the beta (problems? We’ll, that’s what the beta version is supposed to be used for, to help eliminate them!). I’m seeing a lot of the same things you mentioned (hard to come up with and try every possible option when you’re just getting used to a new app). I notice the same issues with the Text Alignment panel. I haven’t played with the point size issue you found yet, but I’ll go back when I have time. And yes, it seems the ability to turn off Animation globally is currently missing. EVERY slide has Animation enabled, regardless how you approach it. You have to select each slide, or a group of slides to de-select it.

Another suggestion – although this doesn’t help OTHER users who are testing the beta, since they can’t see your comments – is to click on the main Help menu and scroll down to “Beta Feedback” and post your problems there. It keeps it off these forums, unfortunately, but I’m guessing gets to the developers in a more timely manner.

I suspect we’ll be the only ones posting here!
I have followed your advice and have pasted my thoughts onto the Beta Feedback page.

There have been two updates since I raised the issue of the wheel crash and others in my first post. Nothing has been pursued.
Also I am now seeing my slides all stacked up and have no way of undoing this that I can see: 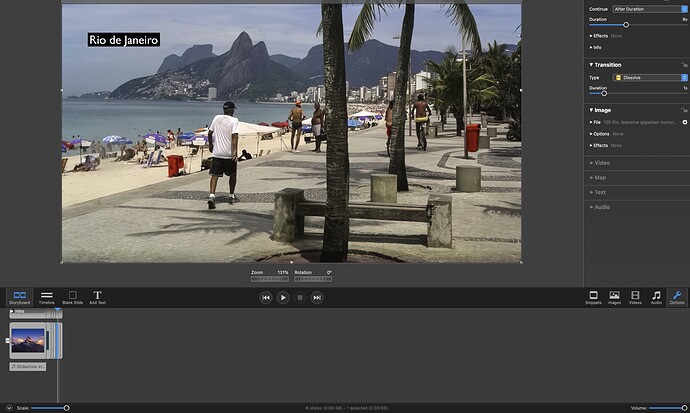 Obviously I can’t play with your screen shot, so not sure how to advise. I see you have Storyboard selected – did you try selecting Timeline and then switching back to Storyboard? Just a suggestion. Also, I’m guessing you are aware that you can NOW enlarge or reduce the Storyboard/Timeline area by dragging up from within the dark horizontal middle control area between the slides and the stage. And of course you can reduce the size of the slide icons by adjusting the Scale slider at the bottom left. I tried to get slides to overlap as shown in your image, but couldn’t get it to happen.

Also, if I’m right, there won’t be any layer limit in the new version

!! FM 5.x had an upper limit of 6 layers (that included both images and text layers). But I believe FM 6.x will have an “unlimited” number of layers. I would image that TOO MANY layers may slow down playback, but not sure how many TOO MANY would be (if it does at all). I already tried 8 images and 3 text layers on one slide and FM 6.0b9 was happy. BUT – adding that many layers showing in the Storyboard/Timeline will require a bit of scrolling up and down to see all of them at once, unless they are reduced in size, which might make it difficult to see them. I guess there has to be a tradeoff somewhere. But having a large number of layers is worth that setback.

Thanks for the suggestions, but they don’t work. I am still stuck with this kind of stack view.
It was boring enough in v5 to have to redo the background for every single text layer. Now, so far in this beta, the background adjustment is buried deeper and there is still no way to get it to go from 100% to 50%, which is always my default.
Are the devs actually reading these threads? Otherwise, I really can’t be bothered to contribute further and will reach a decision on whether to move from v5 to v6 once it is released.

It’s always a bit frustrating finding something that doesn’t work and then waiting for it to be fixed, but software development does take some time, and routing out some bugs is a lot easier than solving others. You have to have patience and give it time. For example, I know he’s aware of the Text panel issues with the left, right, center icons being messed up (a “?” mark inside a small square), and it wasn’t fixed going from .b8 to .b9, but it’ll get repaired before the released version, I’m sure.

I don’t work for Boinx and have no association with them at all, but I have had contact with the author and I know he’s committed to getting things right – it just takes time.

I do hope you are right!
Meanwhile I am unable to proceed with beta testing on my test slideshow until I have sorted out the above-mentioned stacking issue. I have reported both on the beta page and by email.
So far the beta doesn’t have the functionality of v5 that I am used to: especially with regard adding text.

The reason the slides are stacked on top of each other is because the “Intro” chapter is collapsed. Click on the disclosure triangle next to the chapter name “Intro” in the Storyboard to expand the chapter. This is the same behavior as in FM5.

Regarding bugs and fixes - I am hard at work eliminating bugs, pushing out new betas every couple of days, so expect these issues to be fixed eventually. Unfortunately I cannot fixes them all at once…

Thanks for that. I never realised! It must have got clicked by mistake…
I don’t use chapter names, so the “Intro” must have got there by default.
Good luck, I will take another look at some of the new features and look forward to further betas.

I don’t use Chapter Names, either, so without using them regularly, it would have been hard to pinpoint the problem without an assist from either someone who uses them – or in this case the developer

The “Intro” chapter probably came with a text snippet that you dragged into the slideshow. A while later you may have collapsed that chapter without realising it…

Question to preview function that is opened by double clicking. That is o.k. but using right or left arrow to check a series of pics does not longer work

Question: where (link) can I upload screenshot of errors

You can upload them here. But not on the Beta Help page
(By the way, I suspect your first language is not English, since your posts are difficult to understand. It might be easier to post in your own language, which some of us might be able to read. The devs of this app are German and I am fluent in French and Spanish)

@Londinense: Which post is difficult to understand, so can try explain the problem better

Not sure what you mean I have never used the left or right arrow and do not see it working either in v5. To select a series of images for deletion or moving you what you do in most Apple apps: Command click on non-contiguous images or Shift click at the end of a sequence.
Upload screenshots to try to explain further.

in version 5 you have the option of scrolling through all the neighbouring photos with the right or left buttons after clicking on the eye symbol.

I didn’t know about the eye button in V5! But when I tried it, it only moves onto a blowup of the next photo in a slide that might have more than two shots in it… 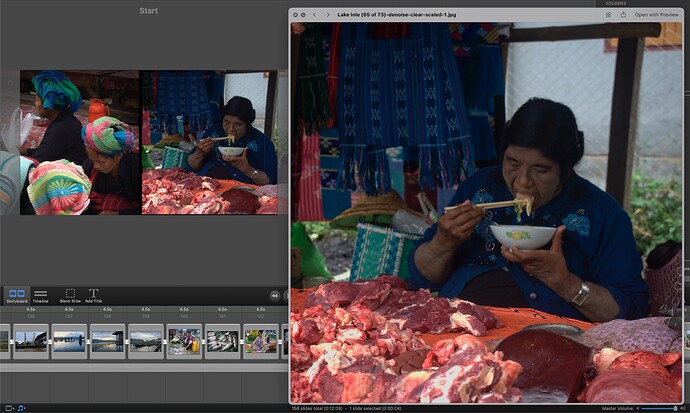 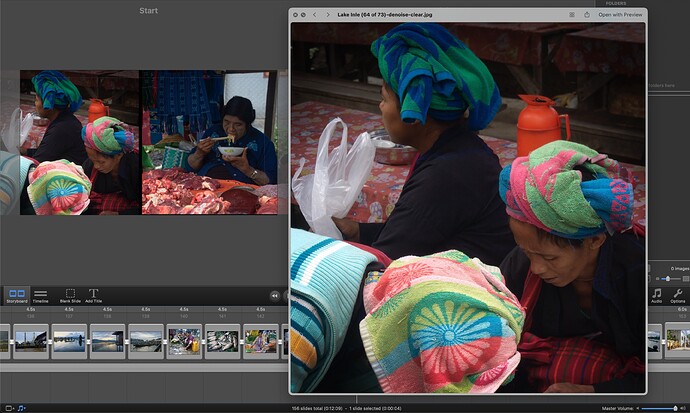 I’m also not sure what you mean by the “eye” button or the “eye” symbol. Are you talking about the TWO slides side-by-side that represent the Storyboard layout? That kinda looks like a pair of glasses (LOL)? If the playback head is at any particular slide and I click the left or right arrows, the playback head moves forward or backward accordingly and shows the contents of the next or last slide, just as I would expect it to. And it doesn’t matter how many images (layers) I have on any particular slide. The forward/backward arrows also work in the Timeline layout as well.