Export window in Dark Theme is not dark

I’m using FM6 Beta 6.0b28 on a MacBook Air with M1 processor.
I selected the Dark User Interface Theme in Preferences.
When selecting any of the export options from the Share menu, the screen is blue and light gray instead of dark gray. The color should look the same as the screen when selecting File menu > New for consistency.

Do you mean the pop-up screen? That’s blue and white on my system and as it’s supposed to be. I think it would look horrible if it was also dark grey.

My pop-up screen for Share > Custom… comes up in a dark theme, and it doesn’t look bad at all. The pop-up is NOT picking up the Fotomagic > Preferences… > General > User Interface Theme > Dark setting, but rather your Mac’s System Preferences… > General > Appearance setting. Change THAT to Dark Theme and the pop-up will appear dark (but you’ll have to accept the overall Dark Theme appearance system-wide – which I happen to like, anyway). 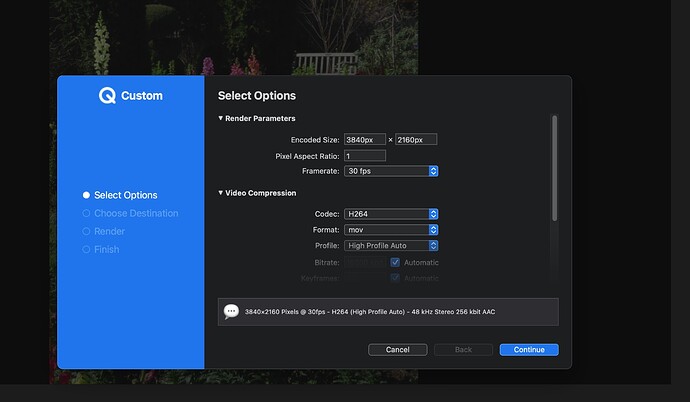 Thanks. It works correctly when I change my overall theme to Dark on the Mac as you suggested.

I don’t like the look of grey on grey. But it’s all personal.

I just like the look of a dark theme/dark background in general. It IS all personal preferences. When you’re working with art and graphics and images, it’s better to have a dark background to bring out truer and more realistic colors. When the eye is bombarded with lots of “white” (or light background), the brain is fooled, too. Besides, too much white is just plain hard on the eyes “Yo, Igor, where did I leave my sunglasses?”

I agree about having a dark background while editing, but the panel in question only appears briefly, so for me that doesn’t matter!