I’m looking for a reason why Mimo dropped up to 2100 frames in a 2 hours test run yesterday.
It mostly happened at the beginning when up to three Mimocalls were tested/active.
Later in the show they also were active, but no more frames were dropped.

The only bottle neck I saw in the Render Performance Monitor was Free GPU Memory sometimes being between only 200 and 0.

Frame were dropped even when File Recording (422LT) wasn’t active.
Besides of that only stream to Onestream.live and DeckLink Mini Monitor in 1080p25.

Another thing which we now noticed two times during tests: We output PGM to a screen via DeckLink Mini Monitor 4K. After a while (ca. 1h) Mimo freezes and after a restart of Mimo the 4K Monitor disappears/greys out. 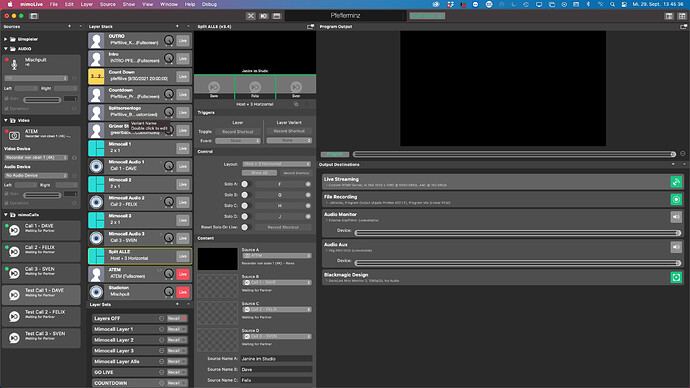 Hi @fototv, the Mac Pro should be easily able to run the document with all 6 mimoCalls, even if you’re using all software encoding. Free GPU memory is not always accurately reported. This is because stuff that’s no longer needed is kept in the memory in case it is used again in the future.

What frame rate and resolution is the document?

Are the frames being dropped in the source or in the destination?

Hey @Oliver_Boinx! Thanks for the prompt response.
Document is in 1920x1080 25p 48.000
Frame drops happened for the stream to Onestream and were reported in Mimo.
Actually max. 3 caller were live/active at the same time.

Can you do a test reproducing this and send me a screenshot of the streaming output destination panel?

If I had to guess I would say that the Internet connection to Onestream wasn’t stable enough for a 5Mbps stream. Unfortunately, you can have as fast a local internet connection as you want and still the RTMP ingest server at your streaming provider might not have the bandwidth or be overloaded.

In the subject you mention “Mini Monitor disappearing”. What version of the Blackmagic Desktop Software are you using?

At the moment I don’t have the cameras and callers in Mimo and later on-site it will be a bit too late. Attached is a screenshot with streaming and recording. Internet connection is different.

At the moment without the callers GPU memory is free. That was more or less the only action when the frames were dropped - callers coming in/out and switching devices.

Desktop Video Setup is 12.1. Mimo froze twice when the 4K monitor blacked out after 1h or so of PGM. 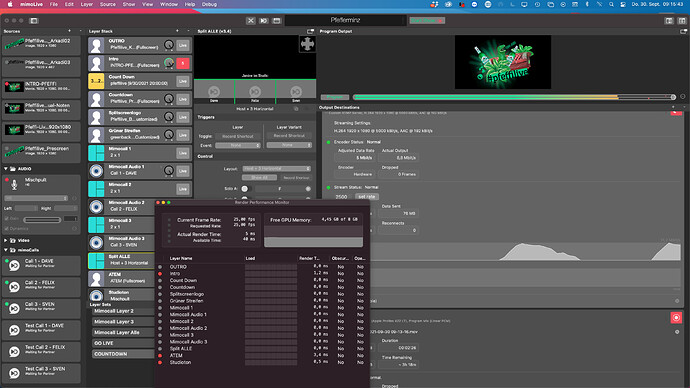 There might be a problem with Desktop Video 12.1 which has been reported by a number of people. Can you go back to 12.0 and try again?