Copy/Paste Snippets isn't editable — only the copied instance is 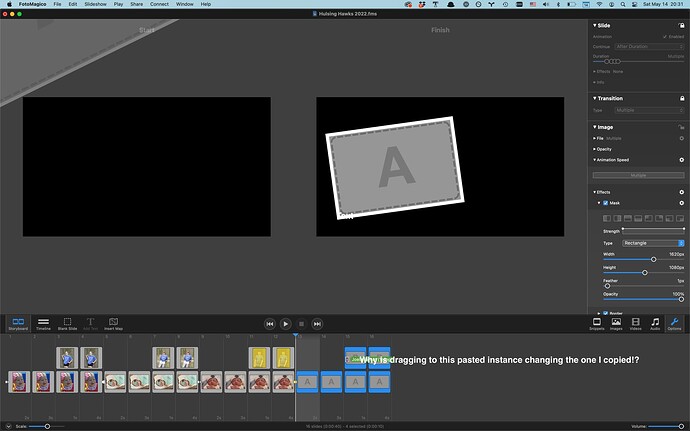 But this completely defies my expectations — I can’t edit the new pasted instance, and in fact trying to drag-and-drop to the new pasted snippet only updates the one I copied from. The one I’ve pasted it’s completely immutable — unless you drag to the viewport (not the timeline or storyboard) but then BOTH instances are updated.

In other words, they’re not separate instances, they are linked together. But I would expect them to be a new, separate, independent instance of the snippet.

What am I missing? Is something locked? Why are they tied together?

My workaround is to manually drag out a new snippet for each repeat of this structure, but that’s kind of tedious because I have to manually delete one of the slides since I only want 2 instead of 3, and I want it to have different durations between transitions. Rather than place the snippet, manually delete the slides I don’t want, change the timing on them for each instance I’d much prefer to copy and paste the empty shell and just drag the photos onto it. That simply doesn’t work.

See the screenshot. When I’m dragging to the copied instance — it’s editing the previous one I copied. That makes no sense, unless they’re tied together internally, which still doesn’t make sense. Why would you want to do that by default?

I tried playing around with this, and you are correct. Copying and pasting a set of frames that compose a snippet from the timeline to another location in the timeline behaves exactly how you described. And I agree that it is not intuitive – and it should be fixed.

Thanks for looking into it. I’ll check it out and see, though I managed to complete the slideshow already… for future reference!