Audio Issue with Universal Audio Device (and other USB types)

Hey folks, we have a larger production where we are mixing audio outside of Mimo using multiple sources for bands and podcast style interaction. We’ve had this issue since last summer, but have not been able to resolve the problem. The audio is a crackle sound that happens intermittently throughout our live streams. I can track down an audio example, but I’ve been in touch with Mimo support. They’ve said using something like Loopback should resolve the issue (they’ve confirmed it is an issue with USB style audio interface devices) but we still can’t resolve the problem. Has anyone had this problem and had any success with being able to resolve it?

Giving this one a bump!

Hi @josh1 Thanks for the bump!

This issue is a tough one which we’ve been working on for a while.

Sorry about the inconvenience. I know Loopback is an investment, but it’s a tool that every live producer should have anyways (along with Audio Hijack, also by Rogue Amoeba) as there are so many usage cases.

Hey @Oliver_Boinx! We’ve got Loopback, I’m still having an issue though - I don’t see the option on the output selection the way we’re routing on to select Loopback. On the input devices>new audio device, I’m able to select loopback, but when building mixes to send out to stream, there is no option to select Loopback as the device, just out Universal Audio device. Can you offer an advice there?

hey @Oliver_Boinx sorry for the delay, screenshot attached. As you’ll see, even with Loopback selected as the input device, I don’t have that as an output option on the right hand drop down for sending our audio to stream. We’re running things a bit odd (sending Mimo audio out of the external headphones, into another audio system, combining that audio with mixed audio - voices, instruments, etc, and then sending a stereo mix back into Mimo). Let me know your thoughts, thanks! 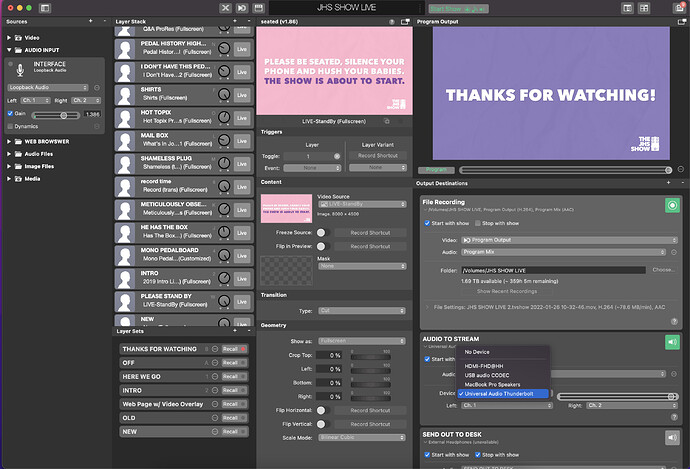 It is indeed unusual that the Loopback Audio device isn’t showing up in the AUDIO TO STREAM, but selecting that would create a feedback loop anyways.

My guess is that you don’t need to send it out to Loopback as the problem is only at the input side.

So, you would set up a Loopback device with the channels coming in from the mixer and just select the proper channels to output it to the mixer in the AUDIO TO STREAM destination.

In order to properly understand what you’re doing, could you send me a diagram of the audio routing?

Hey @Oliver_Boinx yeah we are definitely not using Mimo in the traditional sense! We are using an external system for mixing audio (including sounds from Mimo, that are sent out to our external system). Reason being is that we are processing things really heavily. We have a live band which requires its own complicated system for monitoring/routing/plugin processing/etc. All our cameras are run through a switcher, those are then combined into a single camera feed for Mimo to see (while switching is handled off camera).

Mimo is used for playing stingers, combining A/V, and of course, sending the “show” out to Youtube.

I’ve drawn a document for you, hopefully you find this helpful. The gist is, we use Mimo to fire stingers (which contain audio), we send those stingers out of Mimo via the external headphone jack on our Mac. That is then sent to the external audio system for mix down with the band/vocals/etc. At that point we send a stereo audio feed back to the Mac running Mimo, and take that audio into the computer via UAD Apollo Twin. That is then an Audio Capture Device in Mimo, which is then the device that we select on the right hand side of the program that is sent to stream, because we want that stereo mix for said “show”.

We don’t have a loop created because we mute audio on all internal stingers/intros/etc in the Audio Mix panel. Two separate mixes within Mimo help us keep the audio separate. We do this so that we can monitor Mimo Audio in our in ears to hear what’s going on inside of the program.

Hopefully that’s in depth enough! Please let me know if I can provide anymore info. 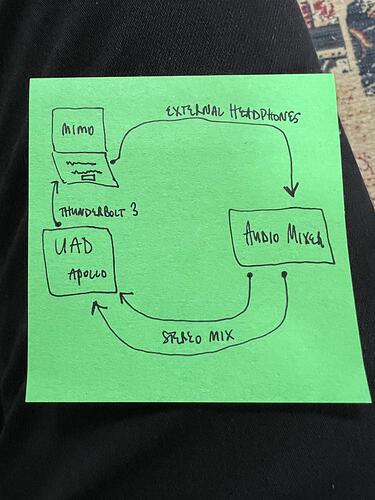 Ah ok, this is very similar to what one has to set up if you use mimoCall and want to route the mimoCaller to an in-ear monitor for the host.

The setup in mimoLive would be as follows:

In the File Recording and Streaming destinations, select the Audio Mix that contains only the audio from the Mixer.

I don’t think you need the AUDIO TO STREAM Audio Output destination. Where should that Audio go?

Hey @Oliver_Boinx I believe (unless I’m totally misunderstanding), this is what we’re doing. The “audio to stream” is labeled as such for our purposes, but that is the 2 channel mix from our audio input capture. Are we not routing correctly? Like, is the routing on the right hand column not the audio that’s going to stream?

Bump @Oliver_Boinx, wondering if you had a chance to read my last post. I’m very curious as to how your method differs from ours (or if we’re doing the same thing but just communicating it differently).

HI @josh1 Here is what I don’t understand: Where is the “Audio to Stream” supposed to go? Back to the mixer?

I just noticed that you will have the audio double in the File Recording as you’re using the “Program Mix”. I think you’ll have to set up a new mix for that to make sure you only record the audio that comes back from the mixer. Maybe that is the problem?

Is mimoLive used for streaming? Or just for recording?

@Oliver_Boinx Thank you for the reply! I sat and spent some time with things last week to really dive into what you were talking me through. It was mega helpful! I was able to figure out what you meant and solve the issues I was having (and started successfully using Loopback in hopes that it prevents the problem from occurring from here on out). Thank you for the time it took for you to work through it with me! Sure appreciate it.