Beta versions do not correct NDI yet

Unfortunately the beta version for 5.8 that needs to connect to external NDI is still not fixed. There seems to be something obstructing him in development.

I used the beta 3, and NDI works fine for me.

I received the NDI as a source from another mac (powerpoint and videos), and I sent the program to a third mac with zoom which received it as virtual camera

Have you installed the NewTek tools and NDI HX driver?

Sorry the NDI output the perfect input, when I want to take the NDI monitor, it does not recognize it

Do you mean NDI Monitor doesn’t show the mimoLive NDI output? Can you please send a screenshot of the document you’re using? 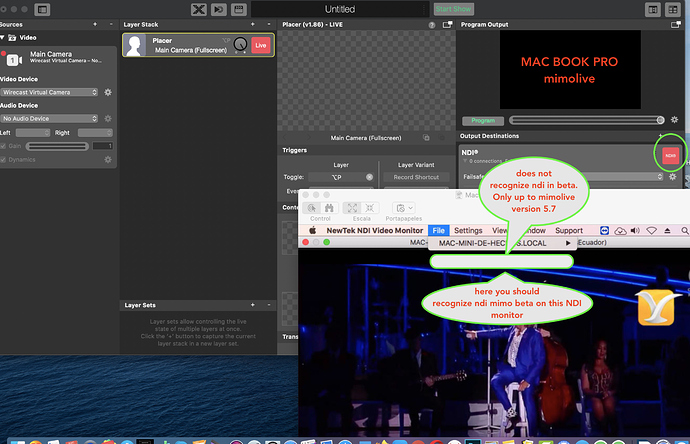 Thanks for the clarification. If that happens, most likely, the both computers are not in the same IP subnet. Can you please post a screen shot of the network settings on both computers?

It is on the same subnet because version 5.7 is working fine with the machine that the beta does not recognize

We’ve not been able to reproduce this. Are both computers using the latest NDI version?

Yes, but apparently you have to do some configuration to the NDI of the Mimo output, in 5.7 it detected automatically, now you have to do it manually in the beta. It is already working let’s hope everything goes well

My understanding is that NDI handling has indeed changed starting from mimoLive 5.8b1.
Source references used to point to the document that was sending the NDI signal, and now they seem to be using the NDI Output Destination name instead.
@Oliver_Boinx @Achim_Boinx Would that be the case?
Thanks!

Gustavo, we found out that the way we named the NDI output caused problems with NDI. So we changed it. The default name is now shorter and doesn’t have any brackets in it. If you rename the NDI output destination, that name will be used.

Looking at your screenshot again, isn’t the MAC-MINI-DE-HECHOS.LOCAL the mimoLive machine? In which case what’s in the sub menu (following the >)?

Ok, so now I also experience this randomness. It seems less random if you rename the output destination.

@Oliver_Boinx, you have no idea how much this little change has simplified my workflow.
Remember I told you and @Achim_Boinx that I broadcast to YouTube from my iMac and to Facebook, Instagram and Restream from my Macbook using NDI?
Thanks to this update, I can have a single mimoLive document that works as an NDI rebroadcaster for multiple mimoLive documents, as long as I use the same name for each NDI Output Destination!
Implemented, tested and deployed earlier today.

Congratulations to the team and thanks a lot!